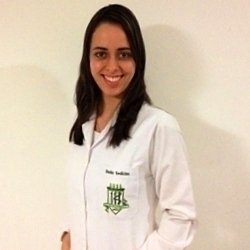 Dr. Sheila Sedicias is a physician with a specialization in mastology and gynecology. She is a licenced member of the Regional Council of Medicine of Pernambuco (CRM-PE), with licence #17459.

Dr. Sedicias completed her residency in gynecology and obstetrics through the  Federal University of Pernambuco (UFPE) in 2008, and went on to obtain an additional specialization in mastology through the through Barão de Lucena Hospital, in Recife-Pernambuco, Brazil.

In 2008, Dr. Sedicias completed a residency in mastology through the Sírio Libanês Hospital of São Paulo, and has since been practicing as a mastologist,  credited by the Prefecture of Olinda City (Pernambuco). You can book an appointment with her by dialing +558132226688 (Brazil).

Period Symptoms: 12 Signs That It's Coming

Implantation Symptoms: The First 5 Signs You May Experience Fishy Vaginal Odor: 5 Causes & Treatment (with Home Remedies) Period Blood Clots: 7 Main Causes & What To Do hCG Test: What Is It For, Levels & Results Leaking Amniotic Fluid: How To Tell & What To Do Can You Get Pregnant Without Penetration? Yeast Infection Treatment: Medication and Home Remedies

Health, Nutrition and Wellbeing in a simple and accessible language. Useful information about remedies, diseases, examinations and treatments based on traditional and alternative medicine.

We adhere to the principles of HONcode Check here.

© 2007 - 2021 Tua Saúde – All rights reserved.
Attention: Tua Saúde is an informative, disclosing and educational space on health, nutrition and well being topics, and should not be used as a substitute for medical diagnosis or treatment without first consulting a health professional.